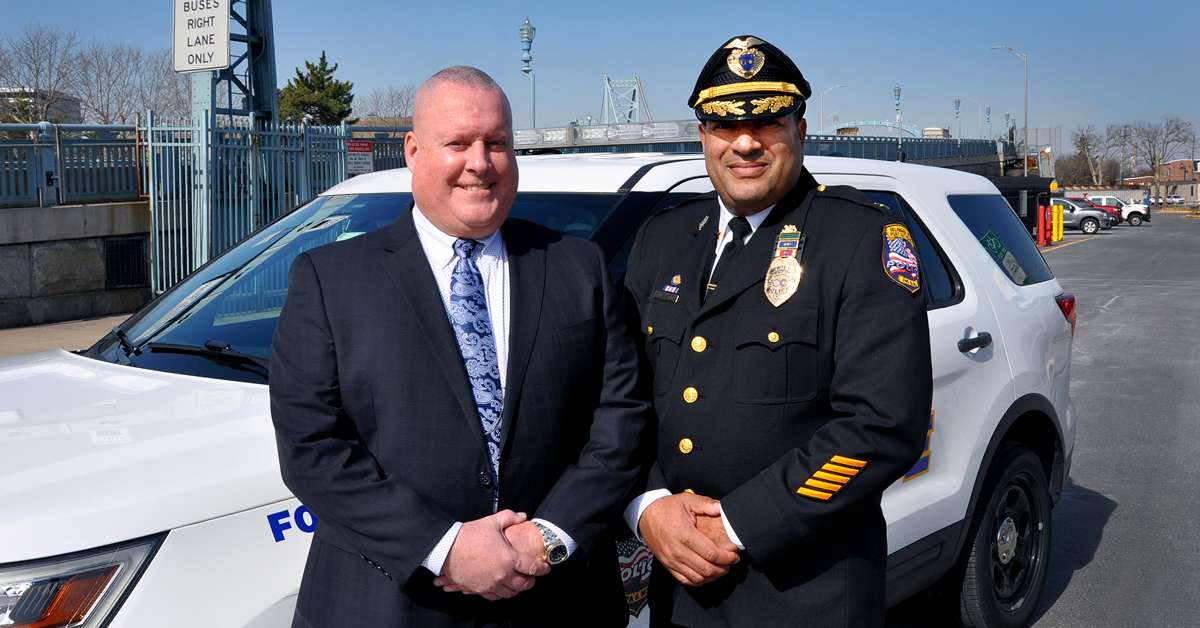 As Chief Security/Safety Officer, Finnegan will manage the Authority’s strategic planning efforts related to security and safety preparedness. In addition, he will oversee the agency’s Public Safety, Homeland Security/Emergency Management, and Safety departments.

“Given the challenges our region and nation face with safety and cyber security issues, I am pleased we are appointing our first ever Chief Security/Safety Officer today,” said DRPA Chairwoman Cherelle L. Parker during the meeting. “Captain Finnegan is described as an exceptional and proven leader who processes strong organizational skills and an extensive working knowledge of homeland security and emergency management. Captain Finnegan’s tenure will be an asset to his position.”

Finnegan, of Gloucester County, N.J., joined the DRPA Police Department as a police officer in 1992. He moved up the ranks, being promoted to the rank of Sergeant in 2000, Lieutenant in 2010, and Captain in 2017. In 2016 and 2017, he served as the Acting Director of DRPA’s Homeland Security & Emergency Management Department.

A life-long learner, Finnegan earned an associates degree from Thomas Edison State University, a Bachelor of Arts and Master of Administrative Science degrees from Farleigh Dickson University. He has earned more than 130 specialized police training certificates and received more than 30 letters of commendations and law enforcement service awards.

“I am honored to be selected as the Authority’s first Chief Security/Safety Officer,” said Finnegan. “I am excited to bring my expertise in public safety to ensure our organization is the safest it can be. From policing to safety initiatives, cyber-security to emergency response efforts, I am looking forward to making an impact on keeping our customers and employees safe.”

As Chief of Police, Cobbs will oversee the Authority’s Public Safety Department which is responsible for protecting life, property, and public assets spread across an extensive area, including DRPA’s four Delaware River toll bridges and the PATCO transit line with its 13 stations. The department handles more than 80,000 calls for service per year.

Cobbs, of Camden County, N.J. joined the DRPA police as a police officer in 1994. During his tenure, he was promoted to the ranks of Corporal in 1999, Sergeant in 2001, Lieutenant in 2010, and Captain in 2017. Cobbs had been rotating with Finnegan as the acting chief of police of the DRPA police department since January 2021. He replaces former DRPA Chief of Police John L. Stief, who retired last year and becomes the first African-American to lead the department consisting of 150 sworn officers and 30 civilian members.

“Being selected as the agency’s new and first African-American Police Chief, I am honored and humbled with the privilege to lead the fine men and women of the DRPA Police Department,” said Cobbs after the appointment. “As I begin this new journey, I look forward to working with some of the region’s most talented law enforcement professionals. Collectively, we will continue to address the challenges facing todays’ policing environment by improving the effectiveness and efficiency of the police department. In conjunction with our mission, vision, and shared values, a focus will be placed on enhancing the agency’s capabilities through innovation, advanced technology, and training. Along with this effort, we will continue to develop and maintain internal and external partnerships throughout our jurisdiction.”

“Captain Cobbs is well qualified to become our next Chief of Police,” said Parker. “He is described as an experienced, transformational leader committed to ethics and valued-based policing. Captain Cobbs possesses strong emergency preparedness and mitigation skills and has completed many specialized professional training programs offered by the New Jersey State Association of Chief of Police, FBI Law Enforcement Executive Development, USDOT Transportation Safety Institute, Camden County Police Academy, and FEMA. In addition to being an excellent choice to lead our police department, Captain Cobbs will also make history as the Authority’s first Black Chief of Police. This will be an important milestone in the Authority’s history and one that is consistent with our commitment to fairness and equity.”

Cobbs is an armed forces veteran who served in the U.S. Army as a military police canine handler. As a life-long learner, he has earned an Associate in Science from Camden County Community College, Bachelor of Arts from Rutgers University, a Master of Administrative Science from Fairleigh Dickinson University, and a Doctor of Education from Stockton University. He is currently a criminal justice adjunct professor at Rowan College of Burlington County and Wilmington University. He has earned numerous specialized training certificates, letters of commendations, and achievement awards.

“We are pleased to have such seasoned law enforcement professionals lead our security and safety initiatives,” said John T. Hanson, DRPA CEO. “Their extensive knowledge will benefit DRPA as it creates new and innovative ways to keep people connected safely.”

The appointments are subject to a 10-day New Jersey Governor’s veto period.