Ramp Closures, Detours To Be Implemented For Walt Whitman Bridge Corridor Rehabilitation At I-76 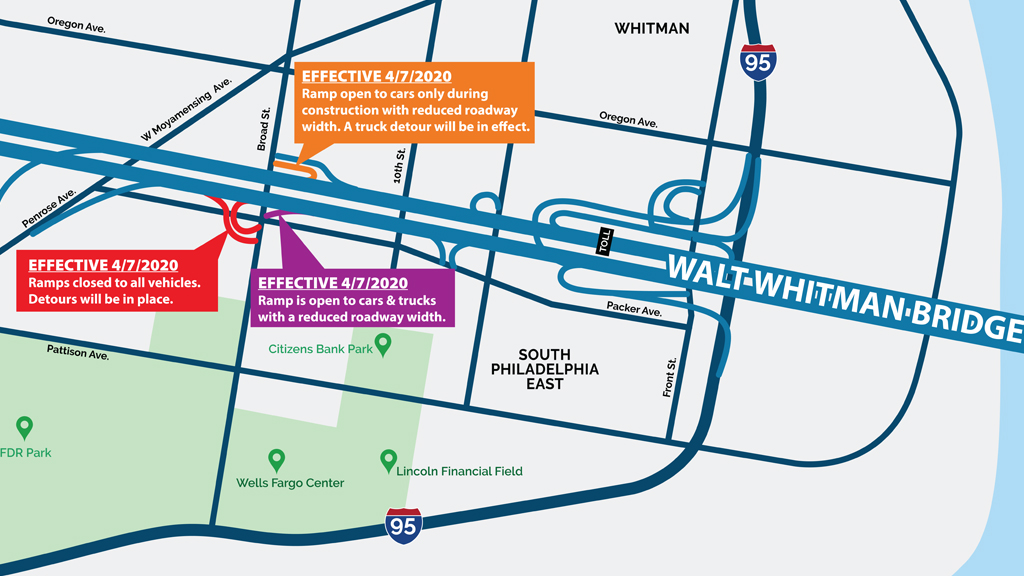 The ramp for Broad Street North to I-76 West will only be closed to trucks due to the installation of a construction barrier reducing the width of the ramp. (ORANGE)

The ramp for Broad Street North to I-76 East will still be opened to traffic. However, the ramp will be reduced in width due to a construction barrier separating the work zone. (PURPLE)

The ramps are expected to be closed until approximately October 2020.

Detours for ramp closures will be in place and the detours will take up to approximately five to seven minutes.

The work for the project will take place along approximately two miles of the I-76 corridor between the toll plaza and the I-76/Passyunk Avenue interchange. Improvements include pavement rehabilitation by milling and overlay, select areas of full-depth pavement reconstruction with curb replacement, minor shoulder grading, addition of drainage inlets, removal and replacement of latex modified concrete on bridge decks, bearing rehabilitation, rehabilitation of pedestrian tunnels, installation of new light poles and electrical lines, installation of new fiber optic lines, and the removal and replacement of sign structures.

The project is scheduled to be completed in the Winter of 2023.