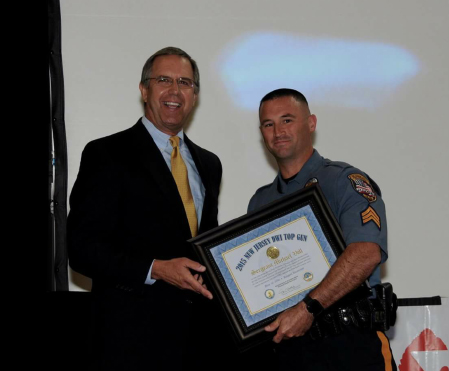 Voll, who made 94 DWI arrests in 2015, was presented with both of the ceremony's top awards. The New Jersey Top Gun Award and the Law Enforcement Outstanding Service Award are presented annually to the officer who made the most DWI arrests in the State of New Jersey in the previous year.

The event recognized more than 600 municipal officers and state troopers who made the most driving while intoxicated (DWI) arrests in their counties and who have dedicated their careers to preventing drunk driving in New Jersey.

"Drunk driving is easily preventable, yet I see the devastating consequences all too frequently. There are normal people who made a mistake and will never do it again, and there are habitual offenders who are a danger to other drivers. We need to get these people off the road so someone else doesn't pay for their mistake," said Voll. "Unfortunately, it seems like everyone has been personally affected by drunk driving - myself included. After my wife's sister was killed by an intoxicated driver, I saw the devastation it causes firsthand, and I use that as a personal motivator to keep the highways safe and prevent drunk driving."

Voll began his career with the DRPA after completing basic training at the Camden County Police Academy in 2000, where he was recognized for having the highest academic average in his class. He received a bachelor's degree in law and justice from Rowan University in Glassboro, New Jersey and a master's degree in administrative science at Farleigh Dickinson University in Teaneck, New Jersey.

"Not a lot of people are familiar with what the DRPA Police Department does, but we make a significant amount of DWI arrests every year, consistently ranking among the top total DWI arrests in the state," said Voll. "We have very well-trained officers and a tremendous level of support from our chief of police, which really helps us crack down on drunk driving. We work hard to keep everyone safe and keep drunk drivers from getting behind the wheel."